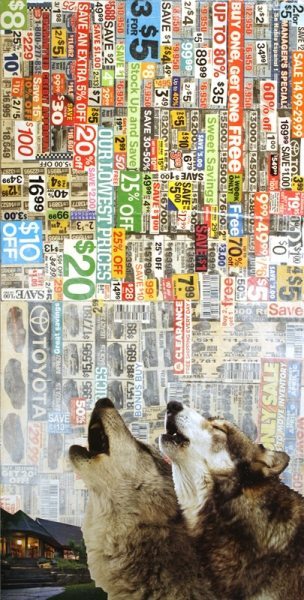 Peter Gordon’s artwork is intended to remind people that, as users of natural resources, goods and services, we impact the environment. He contrasts images of natural and manmade elements to emphasize the fragility of the ecosystem in the context of modern society. The enigmatic, atmospheric paintings portray scenes in which a black bear, unable to hibernate, roams for food on a sunny, winter morning. Another depicts a lonely ice fishing hole, abandoned after a quiet day.

In Gordon’s vivid collages, clippings of prices, sales slogans, and real estate offerings are used to create backdrops for animals, out of place in their now unfamiliar territory. “I want viewers of my work to feel encouraged to make, and promote, environmentally conscientious decisions in their daily lives,” Gordon says. “In doing so, my work will have a positive impact on the world through the actions of others.”

Gordon has had solo exhibitions of his work at venues such as the Park View Gallery in Glen Echo, Maryland; the Hampden Gallery at the University of Massachusetts, Amherst; and the Joan Hisaoka Healing Arts Gallery and the Urban Art Group, both in Washington, D.C. Gordon has participated in numerous group shows over the last 12 years from Maryland and Virginia to New York, Massachusetts, California, and even Bucharest, Romania. He has extensive experience as an art instructor on the college level and has worked as a graphic designer in Boston; College Park, Maryland; and Washington D.C. Gordon holds a master of fine arts degree from the University of Maryland and a BFA from the University of Massachusetts, Amherst. He also studied studio art and art history at the Lorenzo de’ Medici School in Florence, Italy. For more information on the artist, visit www.petergordonart.com. 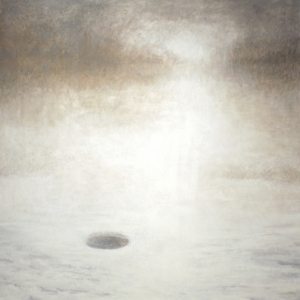 No Bites on Windsor Pond by Peter Gordon