Animals of the World in Miniature

The fourteen miniature scenes depicting animals and plants in their native habitats that comprise the World in Miniature were created by Louis Paul Jonas, a sculptor and taxidermist recognized for the fine quality of his work, which has appeared in many museums around the world. These dioramas were built and installed over a period of twenty-four years, with the final installation occurring in 1970. Built to one-tenth scale, the dioramas illustrate the ecology and geography of locations across the globe. Above each scene, a relief map of the world shows where each scene is located. 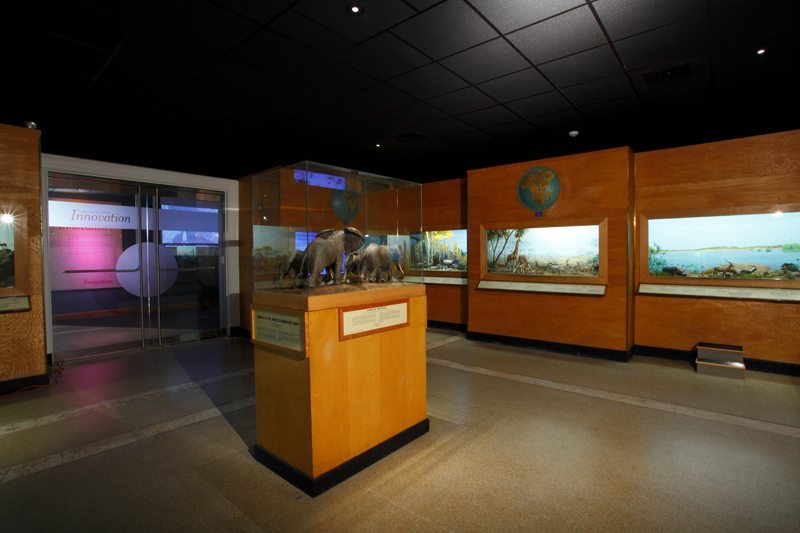 Jonas is most widely known for his life-size models, particularly a series of model dinosaurs created for the 1964-65 World’s Fair that included a 60-foot-long sculpture of what was then known as a Brontosaurus. A Stegosaurus from that same series, now fondly known as “Wally,” resides on the Berkshire Museum’s front lawn. The World in Miniature is itself a charming reflection of the era in which it was created. While Jonas’ animal models are just as accurate today as they were more than fifty years ago, the wood paneling surrounding the dioramas, the occasionally anthropomorphic style of writing in the text panels, and certain historical details (for instance, the captions under the Alaskan diorama were written before Alaska entered the United States) all provide a glimpse into mid-twentieth century American culture. The diorama depicting a scene along the Nile River shows such animals as the white-eared kob, roan antelope, crocodile, hippopotamus, water stork, crane, ibis and more. The Nile, stretching nearly 4,000 miles, is the second longest river in the world and large areas of marshland may be found along its banks. Another diorama shows a section of the Great Plains, which cover a huge area of gently rolling land in our western states. Ranging in altitude from 1000 feet in the east to 6 thousand feet at the foot of the Rocky Mountains, this area has greatly suffered from the impact of advancing civilization. This scene in North Dakota predates the “western movement.” Even in summer on the Northern Tundra in Arctic Canada, the earth never thaws except near the surface, although in recent years that is changing due to global warming. Here animals the likes of Arctic foxes and wolves prey upon the Arctic hare. Other dioramas in the World In Miniature include African Water Hole; Amazon Jungle; Rocky Mountains; The Congo Jungle; Mount Kilimanjaro; India; Lions on the Serengeti Plain; Australia; Southern Africa; Arctic Ocean; Alaska; and African Elephants.