What’s In The Basement? Episode 4: The Cheshire Cheese Screw

Why does the Berkshire Museum collection contain a screw from a cheese press? Because it was used to make a historic block of cheese! In this episode, discover the story behind the great 1802 Cheshire Cheese with our special guest host. 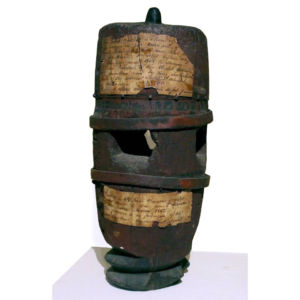 Craig: Today we are joined by…

Craig: And Finn, how old are you?

Craig: And Finn I have a question. Do you like cheese?

Craig: How about, would you like 1200 pounds of cheddar cheese?

Finn: That might be a little bit too much for me.

Craig: Well, today on What’s in the Basement? we are going to reverse our roles and Finn is going to play host and I am going to answer some of his questions.

Finn: Well then let’s get into it. What object are we talking about today?

Craig: Well, Finn, this is a cylindrical object made of wood and iron that is almost 2 feet tall and 9 inches in diameter, with a screw-like base. It is painted red and has a faded handwritten label that reads “presented by E.D. Foster, Grandson of Capt. Daniel Brown to the Hon. James F. Robinson of North Adams, March 1885. The [something illegible] is in possession of the New England Agricultural Society.” This is part of a larger machine called a cheese press, the screw part as you may have guessed from the shape. And this was a particularly large cheese press, in fact it was originally a cider press that was repurposed for one very special occasion.

Finn: Oh really, what was that?

Craig: Well in 1801, the people of Cheshire Massachusetts, led by the pastor John Leland, decided to honor the newly elected president Thomas Jefferson, with a giant block of cheese!

Finn: That’s an interesting gift idea. I imagine there must have been a lot of work involved in that.

Craig: You’re right. The people contributed milk from hundreds of cows and throughout the summer went through the not-so-pleasant process of cheesemaking, which most were familiar with, but on a much smaller scale. They adapted a cider press for the purpose and in the end, the cheese was 4 feet in diameter and 15 inches thick. It weighed an estimated 1,230 pounds and had a favorite quote of Jefferson’s inscribed on it.

Craig: Yup, are you ready for this? It was “Rebellion to tyrants is obedience to God.”

Craig: Yup. Thomas Jefferson did not fool around with tyrants.

Finn: So what happened to the giant block of cheese?

Craig: I am so glad you asked! John Leland took the cheese to Washington DC and presented it to the president on New Year’s Day 1802. Jefferson was the kind of person who does not accept gifts, so he paid Leland $200 for the mammoth cheese.

Finn: And do you know why the people of Chesire went through all this trouble?

Craig: It may seem sort of silly now, but cheese was a really important dietary staple for early New Englanders. Cheesemaking goes back thousands of years, we have records as far back 4000 BCE showing that the ancient Sumerians were eating cheese. There’s a good reason for this that anyone who has ever left their milk out on the counter can understand. Milk spoils quickly and turning it into cheese is a great way to preserve it. Cheesemaking was vital for early colonists, who brought the process with them from Europe. In fact, they brought cheese with them on the Mayflower. It remained a homemade essential product until the mid-19th century. In the election of 1800, Jefferson had defeated incumbent president and Massachusetts hero John Adams. Cheshire was the only town in the entire state to support Jefferson. And they’re still proud of it. You can go visit a concrete monument of the cheese press in Cheshire today.

Finn: What was the role of this screw in the process of making the great Cheshire Cheese?

Craig: To explain that, we need to understand the broad strokes of cheesemaking. It’s not at all glamourous, but it is a really cool scientific process that has essentially been standardized since the time of the Romans. Although advances in technology have made some things easier. The first step, obviously, is to get some milk. We usually think of cow’s milk, that’s the most common, but milk from all kinds of mammals can be used, like sheep or goats or reindeer or camels even. Cheesemakers add two things to the raw milk. A starter, a helpful bacterium that causes the milk to ferment, and an enzyme called rennet, which kicks off a different chemical reaction that causes the milk to thicken. What had been milk separates into solid lumps of curd and liquid whey. Some of the whey is drained out and the curds are cut up and heated, and the differences in this step give us different types of cheese. Hard, dry cheese like cheddar are cut into tiny pieces and cooked at higher temperatures, while moister cheeses like brie are exposed to very little cutting, or heating, or stirring. Unripened cheese, like cottage or cream cheese, are done at this point. Other cheeses need a little more processing, and that’s where our object here comes in. This is the head and the top part of the screw that controlled the cheese press, which was like a big mold. The cooked curds were pressed and the whey squeezed out and then the rest is left in place for weeks or months or in the case, some hard cheeses like a sharp cheddar, a year or more. Our brie, meanwhile, will be ready in about a month.

Finn: Whoa! That’s an awesome scientific process! What ever happened to the mammoth cheese?

Craig: Excellent question. It was reported to still be at the White House for at least a few years. Legend has it that the last bit of the cheese was either served at a presidential reception or thrown into the Potomac River in 1805.

Craig: This is an amazing connection to our past. The average American eat 37 lbs of cheese a year but how many of us have ever made our own or even seen it made? Finn, thank you for being host today.