What’s in the Basement? Episode 15: The Mountain Lion

Explore the science and history of taxidermy as we take a closer look at our ethically sourced female mountain lion. 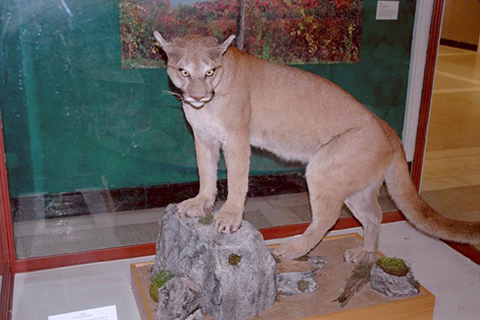 Craig Langlois: Welcome to What’s in the Basement? a new podcast from the Berkshire Museum.  In each episode, we will explore objects and stories from our collection of over 40,000 pieces of art, historical artifacts, and natural specimens. I’m Craig Langlois, Chief Experience Officer for the Berkshire Museum and host of What’s in the Basement? Today we are joined by…me!

That’s right, the team is off working on other projects today, so for the next five minutes it’s just you and me and our object. Let’s get started.

Today we are looking at a taxidermy specimen of a female mountain lion. A mammal from the felidae, or cat family. Its large body is covered with beige fur, except for wisps of gray on its belly and chest and the black markings on the tip of the tail, ears, and around the snout.

The largest of the American cats, mountain lions historically inhabited a vast range spanning much of the western hemisphere. From the Yukon in Canada to the Southern Andes in South America. An adaptable, generalist species, the mountain lion can be found in every major American habitat type. But human activity, like hunting and habitat destruction, have devasted the population over the centuries.

This particular specimen is considered a western mountain lion. Its eastern counterpart, known as the eastern cougar, is technically extinct. Technically extinct. That’s one of those statements that ponders probably more questions than it answers, so let’s try to break it down a little bit more. Because their territory spans countries and continents, these animals are known by many names, including cougar, puma, panther, etcetera. But genetically, they are all the same species known scientifically as “puma concolor.” The were so prevalent in the 19th century that taxonomists classified different subspecies like the eastern cougar, western mountain lion, and Florida panther. Fun fact! The Florida panther is the only subspecies still breeding east of the Mississippi. For a long time, the eastern cougar was on the endangered species list because of habitat loss due to farming as well as overhunting. You see, mountain lions can survive almost anywhere they can find shelter and prey – in mountains or woodlands or wetlands or deserts. But they are territorial and solitary by nature, so each individual requires a lot of wilderness. This kind of large-scale unfragmented habitat is increasingly hard to find.

Besides unsustainable hunting practices, habitat destruction from the development of suburbs and highways and urbanization, and other human interventions, have isolated mountain lions from their natural habitats thus negatively affecting mountain lions’ ability to reproduce and survive in the northeast; this phenomenon is referred to as “inbreeding depression.”

In 2018, the eastern cougar was officially declared extinct because there’s no sustainable breeding population in the eastern United States and that’s the key to the technical extinction. Those of us who live in Berkshire County, we have all either seen or heard stories about mountain lions in our backyards, running across the roads—they are here, but it is not believed that they are sustaining a breeding population.

As we mentioned in the beginning of this podcast, we are not looking at a live mountain lion. So what does it mean for something to be “taxidermy”? Taxidermy is the scientific practice of preserving a body for display or study. The word “taxidermy” comes from the Greek words, “taxis” which means “arrangement” and the “derma” or “skin,” so the whole word mean, “the arrangement of the skin.”

As early as 2,200 B.C.E., the Egyptians were embalming cats, dogs, birds and other animals, making them some of the first known taxidermists. Taxidermy requires you to look at both living and dead animal bodies carefully and extensively in order to mount a specimen in a life-like manner. Early taxidermists stuffed mounts with sawdust and rags; taxidermy in the Victorian era was a popular way for European scientists and the public to examine foreign species they’d never see otherwise. Arsenic was widely used to repel insects form the late 1700s up until the 20th century but was phased out in favor of less dangerous chemicals like Borax. Modern taxidermists can purchase mannequins which they can sculpt into different positions then stretch and sew skin over them.

Beyond our mountain lion, the Berkshire Museum has a pretty extensive taxidermy collection and it still serves a pretty important scientific role. Dating back to the 19th century, scientists could use museum taxidermy collections to study traits within animal populations such as size ranges and color variations. Traces of pesticides or pollutants used many years ago can be detected in specimens and tell us something about its life history and how it was impacted. DNA can be taken from hairs, feathers, or skin fragments to help us understand the genetics of changing animal populations over time.

So one question that might be floating around in your mind, is how the museum acquired this mountain lion specimen. This specimen came to the Berkshire Museum in 2012 from LaBlue’s Taxidermy in Idaho. Because this animal is an endangered species, the museum was very specific on how this specimen was acquired – making sure it died a natural death and was not hunted.

We spent the last few minutes exploring the science of taxidermy, the history of taxidermy, and as always here on What’s in the Basement?, we want to end with a conversation around relevancy. The art and science of taxidermy is fascinating, especially its interconnectedness to human nature. For starters, research reveals that many people’s earliest memories of museum visits often involve large, static displays containing taxidermy! Even today, in a world where museum interpretation and storytelling can feel almost overwhelming, there is something about the stillness and scale that allows viewers to get lost in their thoughts, transporting them to another place and, to some degree, another time.

Many of the museum’s taxidermy predates the museum. Many are in just as good of shape today as when they were first put on display. Many contain toxic chemicals that were once thought to be best practice. Many are anthropomorphized, a highly popular style from the 1880s through the 1920s. Each thread tells a different story of our relationship with the natural world, including our fascination with and the almost endless creativity it can inspire as well as the human progression while protecting the remaining wild populations and habitats. Ethically sourced taxidermy, like our mountain lion, still have a place in museums; they can be an invaluable teaching tool for current and future generations.

Museum basements can be magical places, even though we can’t have all 40,000 objects on display, we can glimpse at the depth and breadth of the Museum’s collection through programs like this. I’m Craig Langlois, Chief Experience Officer for the Berkshire Museum, I hope you can join us for future episodes of What’s in the Basement?