What’s in the Basement? Episode 14: Cast of Nike

The Winged Victory of Samothrace is one of the most recognized statues in the world. The plaster cast here at the Berkshire Museum, created around 100 years ago by P.P. Caproni and Brother, connects to the museum’s history as a window to the world.

Craig Langlois: Welcome to What’s in the Basement? a new podcast from the Berkshire Museum.  In each episode, we will explore objects and stories from our collection of over 40,000 pieces of art, historical artifacts, and natural specimens. I’m Craig Langlois, Chief Experience Officer for the Berkshire Museum and host of What’s in the Basement? Today we are joined by:

Craig: Welcome Peter. Today’s object is one of my personal favorites in the collection at the Berkshire Museum, so let’s get started. What object are we exploring today? 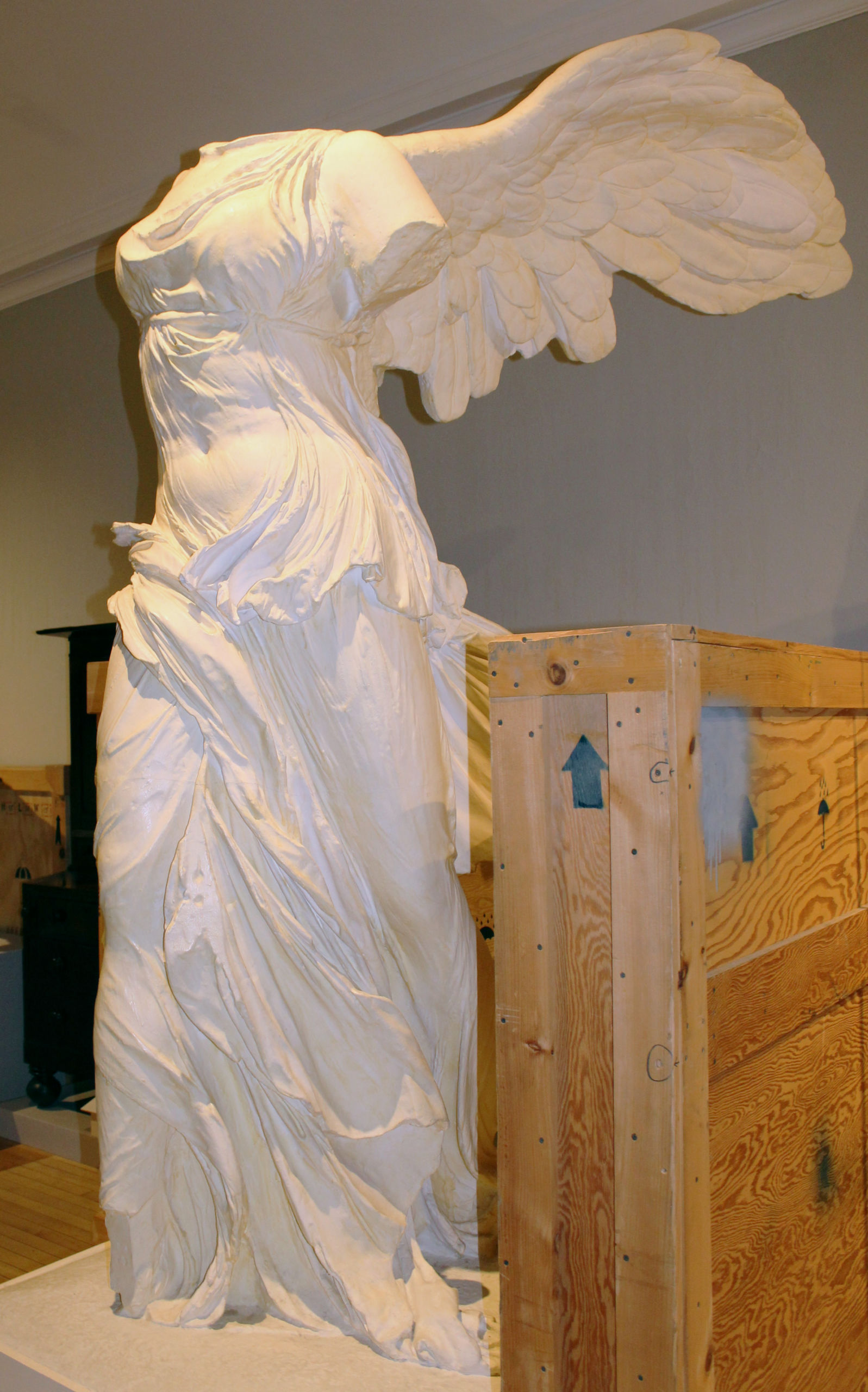 Plaster cast of “The Winged Victory of Samothrace”

Peter: While this podcast is called What’s in the Basement?, this particular piece is so large it cannot leave the gallery it’s in, and in fact when it arrived here at the museum it had to be lowered through the ceiling! I’m of course speaking about our plaster cast of The Winged Victory of Samothrace, otherwise called The Nike of Samothrace. The statue is a robed woman, specifically Nike, the Greek goddess of victory. It stands about 9 ½ feet tall, with large wings stretched out behind her. The two wings appear identical because the right wing was never found so a copy of the left was created. The arms and head are missing having been lost to time, though her shoulders hint that the right arm was reaching up and the left arm was down by her side. There is still debate as to exactly when the statue was carved; however, it does date back to the Hellenistic period, which is a period of time between the death of Alexander the Great and the Roman conquest of the Greek world. Historians initially theorized that the statue had been commissioned by a Macedonian General to celebrate a naval victory around 290 B.C. However, modern scholarships date the statue between 220 and 185 B.C., leaving the battle commemorated in doubt. Though the exact date and sculptor may have been lost, The Winged Victory remains one of the most famous surviving examples of sculpture from the Hellenistic period.

Craig: Surviving original examples? What do you mean by that?

Peter: Creating a copy of a statue is an ancient tradition. There are many Roman statues that are known to be copies of earlier Greek works, even though the original work has been lost to time.

Craig: Thanks Peter. Who was Nike in the eyes of the Greeks?

Craig: The Nike sculpture the Berkshire Museum has in its collection is a plaster cast. Where can we find the original?

Peter: That’s right, the original statue resides in the Louvre in Paris. However, it was created over 2,000 years ago on the island on Samothrace in Greece to celebrate a victory. While we don’t know which victory it commemorates, the statue was erected as part of a larger temple complex which would have included an altar so people could make offerings to Nike. Now the cast here at the Berkshire Museum was created by Pietro Paulo Caproni and his brother Emelio about 100 years ago. At the time our Nike was made you could find large plaster cast collections in museums around the country.

Craig: Interesting. So why would museums invest in these plaster copies?

Peter: The practice of creating plaster copies has been around in Europe since the 15th century. Over time the plaster copies would go from a way to beef up your estate’s collection, to a more educational role. By the 19th Century many museums in the U.S. used plaster casts to build up their collections and offer a broader range of works for the public to see. For universities and art academies, plaster casts allowed for an in-depth examination of the work while studying anatomy. The plaster collections also had the additional benefit of being much more affordable and faster to bring into the museum as local artisans were creating them. Remember, there’s only one original Nike, but, if you can’t make it to the Louvre, our Nike allows you to experience the true scale and get a sense of the artistry that went into creating the original.

Craig: It sounds like this was a pretty robust business at one point in our history. Who were the Caproni brothers?

Peter: They were originally from Braga, Italy. The eldest brother Pietro left for Boston in the late 1870s. It was there that he apprenticed for a plaster maker named Paul A. Gary, eventually buying out Paul A. Gary’s company with his brother Emilio in 1892, renaming it P.P. Caproni And Brother. As a respected master of plaster, Pietro would make several trips to Europe to cast collections at many of the museums there, including but not limited to The Louvre, the National Museum in Athens, The Vatican Archives, the Uffizi Gallery, and the British Museum. By 1911 the brothers had amassed a collection of over 4,000 pieces, ranging from small anatomical casts intended for art schools, to full-sized casts of classical works for display at museums. Eventually the demand for classical and Renaissance sculptures waned, so the brothers began to branch out into contemporary sculpture as well.

Craig: Peter, you briefly mentioned smaller casts for art students. What would those look like?

Peter: Those casts would focus on fine details such as the hands or details of the face like an eye or an ear. You know, the details that get easily lost when viewed from a distance. Plaster copies allow one to get much closer to the work than you could viewing it in a museum. And the more skilled the plasterer, the more detail would come through in the cast.

Craig: Peter, our final question here on What’s in the Basement? always revolves around the concept of relevancy. What makes this relevant to today’s audience? 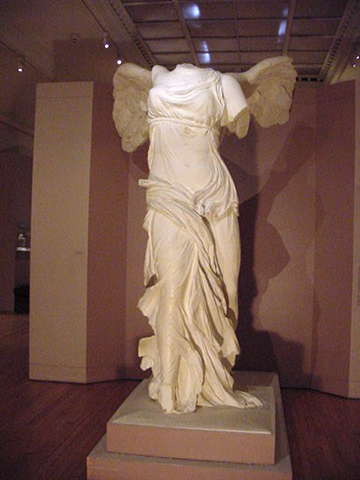 Plaster cast of “The Winged Victory of Samothrace”

Peter: Plaster casts like our Nike represent a way to explore art without having to take a weeks-long voyage, over land and sea, to the museum it’s held in.  In the 19th century, international travel was prohibitively expensive, even more so than today. For many, their window to the world came from their resources in their own community such as museums. While some paintings and other collections travel the globe, many statues remain in place in perpetuity.  For example, the only time the original Nike left the Louvre was in 1939 ahead of the German invasion of France at the start of WWII.

While one could buy a book or look at photographs of a statue, the physical impact is lost. The plaster collections would give museum visitors a much greater sense of the sculpture, allowing one to experience the true size of the work.

To put it in a modern context, this was the virtual reality tour of the 19th century, allowing a visitor to see works held in museums around the globe up close. Today the internet is offering new ways to explore art, be it virtual reality to high detail 3D renderings, the motivation remains the same.  The goal is to reduce the barriers between people and art, and to make it as accessible as possible regardless of where you are.

Craig: Museum basements can be magical places, even though we can’t have all 40,000 objects on display, we can glimpse at the depth and breadth of the Museum’s collection through programs like this. I’m Craig Langlois, Chief Experience Officer for the Berkshire Museum, I hope you can join us for future episodes of What’s in the Basement?