Arctic explorer Matthew Henson (1866-1955) wore this fur suit, made for him by an Inuit woman, on his successful expedition to the geographic North Pole in 1909, making him one of the first people ever to reach that spot. Because of his race, Henson was denied recognition for this achievement for decades while his fellow explorer Peary, who was white, was feted around the world.

Craig: Welcome, Kendra. What object are we exploring today? 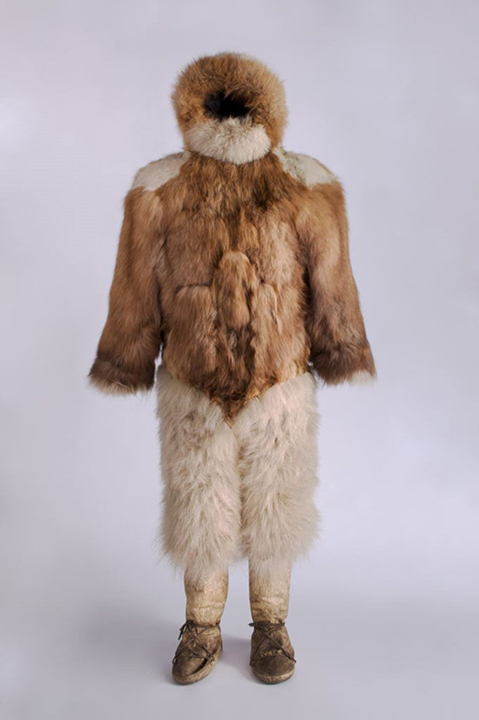 Kendra: This is a full-size fur suit, including parka, pants, mittens, and boots that are all over 100 years old.  Each piece is made using furs from several different Arctic animals, including polar bear and blue fox, sewn together in a patchwork. A suit like this would keep its wearer warm and dry in the most extreme conditions, even at the North Pole.

Craig: Kendra – are you saying that this suit has gone all the way to the top of the world?

Kendra: Yes! This suit belonged to Matthew Henson, an Arctic explorer who was one of the first people to ever reach the geographic North Pole back in 1909.  He may have even been the very first, though there’s plenty of debate about that and we’ll probably never know for sure.

Craig: I always heard that Robert Peary was the first person to reach the North Pole. I feel like we’re about to present some alternative theories.

Kendra: Well, Peary certainly gets most of the credit, but the reality is far more complicated.  You see, Henson was a major part of each Arctic expedition led by Peary, but because Henson was black his contributions were largely ignored until many years later.  There’s also the possibility that another Arctic explorer had reached the North Pole a year before Henson and Peary did. Or, that Henson and Peary did their measurements wrong and didn’t even make it.

Craig: So who was Matthew Henson and how did he end up at the North Pole?

Kendra: Matthew Henson was born to sharecropper parents in Maryland in 1866.  Like many black families in the South at that time, the Hensons were subjected to racist attacks by the Ku Klux Klan and other white supremacists, so they moved to Georgetown, which is now part of Washington, D.C.

Matthew longed for adventure, and at 12 he signed on as a cabin boy on a ship called the Katie Hines.  He spent five years sailing to East Asia and Africa and Europe and the Arctic. On these voyages, his duties were predominantly to serve the captain and keep his room in order. But Henson also learned navigational skills and carpentry skills like how to build a sea chest and mechanical skills for engine and rudder repair. When he wasn’t working, he read books from the captain’s library and learned about geography, history, math and literature.

After the captain died, Matthew returned to working on land, but unsurprisingly he was only able to find menial, low-paid work despite all his skills and knowledge. He was working in a department store in Washington, D.C. when he met Peary, who came in looking for a new hat for an expedition to Nicaragua and ended up leaving with a new partner in that trip and many more.  Over the next 22 years, the pair embarked on 18 expeditions together, including eight trips to the Arctic and through them all, Henson was known as Peary’s “first man.”

Craig: That is quite the origin story. Circling back, Henson wore this suit on those expeditions?

Kendra: Well, Craig, we know he wore it for at least one–his final trip. By 1909, Henson and Peary had tried and failed to reach the North Pole seven times. They left aboard the Roosevelt on August 18, 1908 with almost 50 Inuit men, women, and children, 246 dogs, 70 tons of whale meat, the meat and blubber of 50 walruses, assorted hunting equipment, and tons of coal.  On April 6, 1909, Henson, Peary and four Inuit assistants claimed to reach the geographic North Pole, as they stood on a floating ice block 413 nautical miles off the coast of Greenland.  On the final leg, Peary was so weak that he had to be pulled along in a dogsled, so Henson was the one to actually plant the American flag in the North Pole.

Craig: That is such an amazing story that I don’t think a lot of people are aware of.  I wonder if you can tell us what it would have been like for them exploring the Arctic back in the early 20th century?

Kendra: As we know, it’s quite a hostile environment up there where temperatures drop to 65 degrees below zero on sheets of drifting sea ice, yet the Inuit people and their ancestors had lived in the Arctic Circle for thousands of years. Non-Inuit explorers needed that knowledge to survive. Knowledge of how and when and where to hunt. They needed the Inuit knowledge of how to build shelter, how to avoid snow-blindness, how to stand, and certainly what to wear to stay warm. Indeed, an Inuit woman sewed this suit for Matthew Henson.

More than any of the white explorers, Henson learned the Inuit language and became a skilled hunter and sled-dog handler.  He built and maintained all the sledges they used, one of which is also in the Museum’s collection.

It was also common for explorers to develop various relationships with the native people they encountered.  Henson and Peary both fathered sons with Inuit women, even though both men had wives at home. After 1909, they never saw these children again.

Craig: Kendra, Henson lived in Maryland, and Washington D.C., and New York City, how did his suit make its way to Berkshire Museum?

Kendra: One of Peary’s biggest challenges, besides actually getting to the North Pole, was funding his expeditions.  Zenas Crane, our Museum’s founder, was a major funder for that final successful expedition in 1908 and ‘09.  In return, Peary donated 16 objects from the journey to the Museum, including that sledge I mentioned earlier from the final trek to the Pole, a harpoon, snowshoes, and this–Henson’s suit.  Zenas later helped fund expeditions of explorer Donald MacMillan, who was also on that 1908-09 trip and wrote Henson’s biography called Dark Companion.

Craig: Kendra, the last question on What’s in the Basement always revolves around the concept of relevancy. Why did we choose to talk about this object today?

Kendra: Like many works of Museum collections, the history of this piece is multi-faceted and nuanced. It’s a relic of a time in American culture when explorers were considered superheroes and stories of exploration, like the Peary-Henson Arctic expeditions captivated the nation. Their chronicles inspired and helped usher in a new generation of scientists, engineers, and artists.

However, the relationship between Henson and Peary, and between the explorers and the Inuit people they relied on, is also one that needs to be told.  Here you have these two men, one black and one white, living and working closely together for more than 2 decades.  In the Arctic, they relied on one another and the invaluable assistance from the Inuit people. But collectively, we really only remember one of those people over all of the others. This speaks to a deep,  underlying racism and history of erasing people like Matthew Henson from the history books and this still haunts us as a society today. The duality of this piece is its power. It’s simultaneously a tribute to the enduring human spirit of adventure and ingenuity and a reminder of where we’ve been and the work we’ve left to do.

Craig: Museum basements can be magical places, even though we can’t have all 40,000 objects on display, we can glimpse at the depth and breadth of the Museum’s collection through programs like this. I’m Craig Langlois, Chief Experience Officer for the Berkshire Museum, I hope you can join us for future episodes of What’s in the Basement?