What kind of place stimulates creative minds and sparks a surge of invention and innovation? The series of blogs posts explore that question with regard to innovation in the Berkshires.

The series is Inspired by the Berkshire Museum’s partnership with the Lemelson Center for the Study of Invention and Innovation at the Smithsonian’s National Museum of American History (NMAH), and our inclusion in the new Places of Invention exhibition (July 2015) in the Lemelson Gallery in Washington DC. 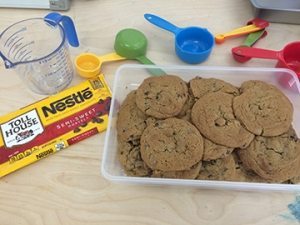 When you take a bite of a chocolate chip cookie, you probably don’t think about it as an invention. While cookies have existed since sugar became a common ingredient in 7th-century Persia, the famous chocolate chip version, the official Massachusetts state cookie, has existed for less than a century!

Ruth Graves Wakefield (1905-1977) was born on February 16, 1905, in East Walpole, Massachusetts. With her husband Kenneth, Ruth purchased a tourist lodge in nearby Whitman in 1928, which they named the Toll House Inn. Ruth prepared meals for the guests, gaining a reputation locally for her lobster dinners and desserts and published her first cookbook in 1930, Toll House Tried and True Recipes, which became a best seller.

In 1938, Ruth made an innovative decision that would soon make her famous.  Experimenting with a new recipe, Ruth added broken pieces of Nestlé’s semi-sweet chocolate bars into her cookie batter and the chocolate chip cookie was born. While some sources claimed her invention was accidental, Ruth was an experienced baker who understood the properties of the ingredient. She named her creations “Toll House Chocolate Crunch Cookies.”

The Toll House Chocolate Crunch Cookie became very popular and the recipe was soon published in a Boston newspaper and was featured on the popular radio show of Marjorie Husted (better known as Betty Crocker). Soldiers from Massachusetts often received these treats in care packages sent to the front during the second World War and shared with their comrades, who wrote letters home beginning a nation-wide craze. This caused the sales of Nestlé’s semi-sweet chocolate bars to increase, leading to a partnership between the Wakefields and Nestlé. Ruth sold her recipe to Nestlé in exchange for a lifetime supply of chocolate and the promise that Nestlé would print the Toll House Cookie recipe on its package, where it can still be found today. Though the Toll House Inn was destroyed by fire in 1984, it is still remembered as the birthplace of America’s favorite cookie.

The author, Adrianna Fox, is Spark!Lab host in Berkshire Museum’s Spark!Lab, where everyday they provide opportunities for children and families to explore their inventive creativity—to create, innovate, collaborate, and problem-solve

Check out Berkshire Museum’s video highlighting the company that makes the paper U.S. currency is printed on. Can you guess? You can find it on the Places of Invention interactive map.