Places of Invention: Innovations in Paper 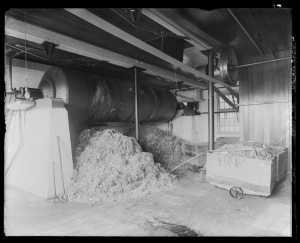 The rag room at Crane & Company in the late 19th century.

For more than 200 years, the rushing waters of the Housatonic River and innovative spirit of the local workforce have made paper a major industry in Berkshire County. At one time, Berkshire mills produced much of the paper used in the United States. Local mills contributed to the boom in papermaking technology in the 19th century and continue to produce pioneering paper products in the 21st. While you may think paper is only good for writing or printing on, the innovators at Berkshire paper mills prove that this ancient material has unlimited possibilities.

The first Berkshire paper mill was founded by Zenas Crane in Dalton, MA in 1801: descendents of this family founded Berkshire Museum a century later. Crane invented a method to embed parallel silk threads in banknotes in 1844, an early effort to prevent forgery. The company’s dedication to constant improvement against counterfeiting is a major reason why their paper has been used to print American dollar bills since 1879, and is now used for numerous international currencies1. Today, with factories in Dalton and North Adams, the company uses a micro-lens array to create tiny graphics that appear to be moving, which is being incorporated into high denomination notes worldwide, including the $100 bill2.

Local inventors contributed to major advancements in 19th century paper manufacturing technology, most notably with the development of the first commercially successful wood pulp paper from native Berkshire poplar, made by the Pagenstecher brothers in Curtisville (now Interlaken) in 1867 and later produced at Lee’s Columbia Mill. This became the first newsprint paper produced in America.3 At the time, Lee was home to 25 paper mills, only one of which is still in operation today,4 while new 21st-century papermaking facilities thrive in Pittsfield and Housatonic.

In the former Willow Mill in Lee, Onyx Specialty Papers Inc carries on the tradition of papermaking in the Berkshires. The first paper mill in town, the Willow Mill was built by Samuel Church in 1806 and under a series of owners has continued to produce paper products into the 21st century.5 Their papers are used for decorative surfaces and graphic arts, as well as automotive, medical and industrial purposes. The laundry tags in your clothes may be made of Onyx’s wet strength label paper. Some of their other products include an analytical paper used as a filter medium to collect protein samples in bioscience laboratories and desiccant, a card-like alternative to the small silica packets used to reduce humidity in packages.6

The author, Kendra Knisley, is a Spark!Lab host in Berkshire Museum’s Spark!Lab, where every day they provide opportunities for children and families to explore their inventiveness—to create, innovate, collaborate, and problem-solve.