Living on Earth: The Work of Robert Hite

Accomplished painter, sculptor, and photographer Robert Hite explores the relationship between man and nature in this dual exhibition at the Berkshire Museum and Hancock Shaker Village. 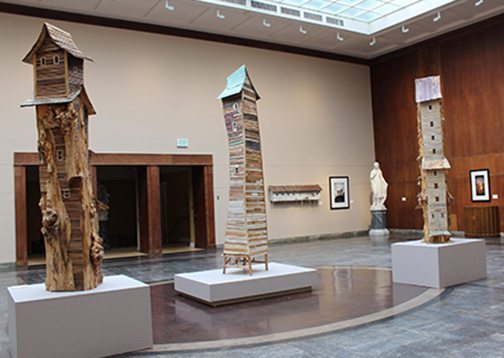 On view through October 30, 2016, each venue showcases different aspects of the artist’s extraordinary talents. The Museum exhibits Hite’s architectural sculptures and photos of these and other of his structures strategically placed in natural settings. The constructions are simplistic, yet fantastic, reminiscent of the “shacks and sheds of marginalized communities” that he knows from his rural Southern upbringing. Made from found objects, they come in all sizes, shapes, and forms, but that’s just the beginning. 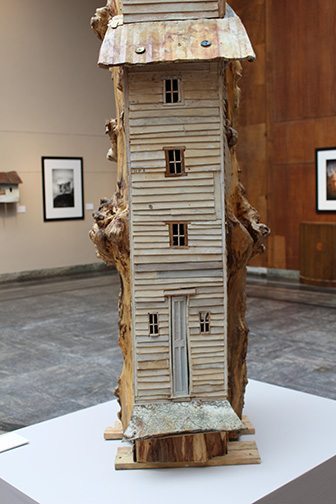 Part two is taking his creations outdoors and placing them in a naturalistic backdrop, be it behind a reflective body of water or embedded in a wooded thicket. Part three is to photograph them in place. The photos often challenge the viewer’s sense of scale, but the results are sculptures and photographs that are both realistically grounded, yet fantastically imaginative. Some of his works appear to have grown out of the living forest, or emerged from a still pond. Others appear to have been standing in place for eons, now surrounded by vegetation, overgrown by the jungle, as it were.

One of the artist’s overriding themes is the place of man in nature. Two of the three large constructions in the museum’s Crane Room are part house and part tree, spiraling upward over 8 feet. Do the trees form part of the houses, or the other way around? Or, are the intertwined elements Hite’s way of depicting a marriage of man and nature? Or, are they vying for the same space? You’ll have to ask him!

To complete his unique “vision”, Hite has developed his threefold creative process over the period of his artistic career, leaving us with a large body of work to study, contemplate, and enjoy.