Laura Bragg and the Origins of our School Programs 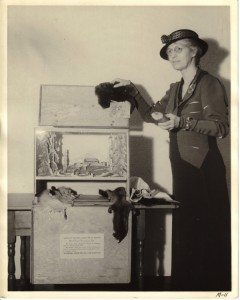 The Berkshire Museum’s first director, Laura Bragg, was a pioneer and reformer who believed that museums hold the power to educate and uplift the masses. Through her work Bragg helped develop a new profession for women as museum curators and transformed the nation’s approach to museum education with her eponymous boxes.

In 1932, Pittsfield, like the rest of the country, was struggling through the Great Depression. Rural banks were failing and the local textile industry was in decline. General Electric, then the city’s largest employer, slashed work hours while teachers and other city workers received salary cuts. 13 million Americans, almost a quarter of the nation’s workforce, were unemployed. That summer, Laura Bragg arrived in Pittsfield as the first director of the Berkshire Museum, which had been overseen since its founding in 1903 by the director of the local library, Mr. Ballard.

Born a Massachusetts minister’s daughter, Bragg was an educated New Woman of the
Progressive Era (1890-1920) who chose to live much of her life in Charleston, SC, a city that was largely illiterate, deeply segregated and stricken by poverty long before the devastation of the Depression. Bragg was an educator at the Charleston Museum in the first decades of the 20th century when she began curating travelling school exhibits, housed in wooden boxes, designed to bring the museum directly to schoolchildren. She became director in 1920, making her the first woman to lead a major American museum. Despite Charleston’s laws of Jim Crow segregation, Bragg admitted black visitors to the museum and sent her travelling exhibits to every public school in the county beginning in 1913.

Impressed by Bragg’s reputation as an innovative and progressive educator, the family of Berkshire Museum’s founder Zenas 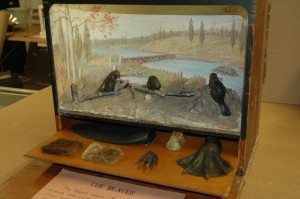 Crane persuaded Bragg to return to her home state to transform a rich man’s collection into an educational institution. It was in Pittsfield that Bragg’s travelling kits, which now included materials from the Berkshire Museum’s closets, basements and other storage areas, became known as “Bragg’s Boxes.” Here, her novel program spread much farther and faster than in Charleston. A childhood case of scarlet fever had left Bragg partially deaf, so she understood the importance of sensation in learning and made sure that each mini-exhibit contained photographs and objects for the children to touch and pass around in addition to the scientific specimens and cultural artifacts and curriculum books. The opportunity to touch must have been irresistible to kids as birds and other animals were regularly replaced after being “petted to death.”

Sixty-six of these exhibits were used in every school in the county. A 1936 article about Bragg and her innovative ideas in the New York Times helped spread the use of Bragg Boxes to museums as far as Texas and Florida.

The museum thrived under Bragg’s leadership. Attendance more than doubled to 66,000 visitors in her first year, drawn in by diverse exhibitions including modern art, Chinese porcelain and Shaker decorative arts. Bragg presided over the enclosure of the museum’s central courtyard, which became an art-deco sculpture gallery (the Ellen Crane Memorial Room) and the theater, which allowed the museum to branch into the performing arts. She invited controversial speakers to give lectures and brought motion pictures to the museum as early as 1934, a precursor to today’s Little Cinema. Her frequent exhibitions of modern art were glowingly reviewed in The New York Times, Art News and other urban publications but caused controversy with the artistically conservative museum patrons. Bragg was the first American museum director to exhibit the sculptures of Alexander Calder (1898-1976) and commissioned two of his early experimental mobiles to ingeniously mask the ventilation system in the new theater, where they remain today.

After eight years in Pittsfield, the culmination of a four-decade museum career, Bragg retired to Charleston, where she continued to teach and nurture young artists and educators. She was nearly 97 when she died in Charleston on May 16, 1978. Today, the Berkshire Museum continues Bragg’s legacy, bringing art, artifacts, movies and lecturers from around the world to the city and providing 16,000 educational experiences to students every year.