None of us can know what we are capable of until we are tested. 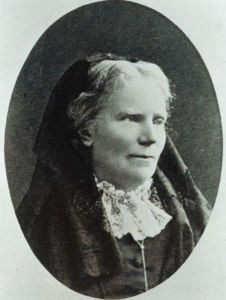 Dr. Elizabeth Blackwell (1821-1910) was the first woman to earn a medical degree in the US and became a champion for other women entering the medical profession.

Elizabeth’s large family moved from England to the US when she was 11 years old. After her father’s death, she became a teacher but was inspired to pursue medicine by a dying friend. After being rejected from 12 medical schools, she was finally admitted to Geneva College. Though her acceptance letter had been a practical joke, Elizabeth gained the respect of her professors and peers and graduated first in her class in 1849. Even with a degree, no one would hire her in the US, so she moved back to Europe to train in hospitals in London and Paris. Like her friend Florence Nightingale, Elizabeth emphasized hygiene and preventative care.

She returned to New York and set up her own practice at age 30. With her sister Dr. Emily Blackwell and Dr. Marie Zakrzewska, Elizabeth opened the New York Infirmary for Women and Children in 1857. The hospital was founded both to care for the disadvantaged in the community and to provide jobs for female doctors. Elizabeth was determined to help other women in the field, training them as nurses during the Civil War and eventually opening a medical college at the Infirmary in 1868.

A year later, Elizabeth left Emily in charge of the college and infirmary and returned to London. She soon started the National Health Society to promote sanitation and public health. When the new London School of Medicine for Women opened in 1875, Elizabeth became Chair of Gynecology. Ill health forced her to retire shortly after, but Elizabeth did not slow down. She wrote prolifically on health and social topics as well as her own autobiography.

Dr. Elizabeth Blackwell suffered a stroke and passed away on May 31, 1910 but her barrier busting legacy continues to inspire.